We highlighted quite a few techniques to deal with reactive systems in Reactive Trader®. There is another one, that we commonly use, that was not demonstrated.

A state machine is a simple yet powerful way of decomposing some functionality into states and a set of valid transitions between them. When you find yourself dealing for instance with user input and/or server events and see lots of branching in your code (if/switch statements) on some _state variables, chances are high that a state machine could be introduced to simplify things.

In this post we will look at a concrete use case, we will define a state machine for it and we will see how we can organise our code around the state machine and interact with it. I've also created a companion GitHub project where you can find the full example.

In finance "Request for Quote" (RFQ) is a common mechanism used to request a price electronically: the client submits a request to the pricing server. At some point, the server provides a quote (or a series of quotes) and the client can decide to execute (hit) or pass (cancel). When a client "executes" or "hits" a price, they are actually placing an Order to make a trade at that given price.  This order could still be rejected for reasons that could be

We are going to build a state machine that would live client side, in some UI application like Reactive Trader®, to control the state of an RFQ.

The following diagram describes the different states of the RFQ and the possible transitions. 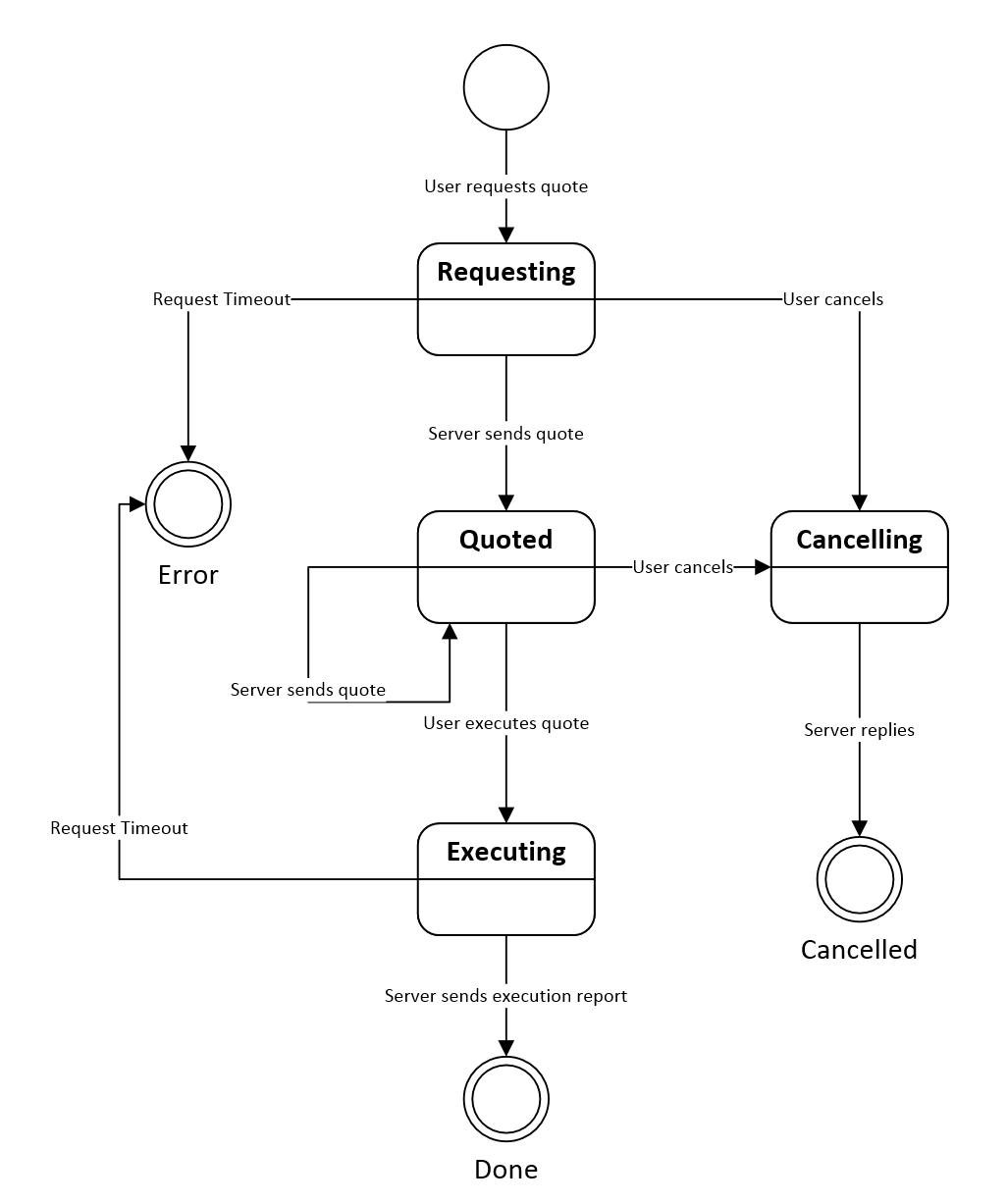 This is a visual representation of a state machine, it contains

I find those diagrams very helpful to think about the system. While building them I will generally go through all the states I already discovered and ask myself the following questions:

From diagram to code

State machines can be implemented in many different ways, either from scratch or using some library. For any decent size state machine, I tend to use Stateless but the recommendations that follow would stand for any library or handwritten state machine.

I like to define state machines in a single place: I find that spreading the definition across multiple files/classes makes it harder to understand.

The first thing we need to do is to define the set of states, we can use an enum for that:

Then, we define the events which will trigger transitions between states. In our case, those are events coming from the client or from the server.

Again, we can use an enum to define those events.

I like to prefix those events with their origin, just to make things explicit (here we have 'Server', 'User', 'Internal')

As you can see events coming from the server always expose a happy path (for instance ServerNewQuote when the server sends a new quote) and at least one corresponding error event (ServerQuoteError).

You will also often have internal events, for instance, a timer expiring can raise an internal event to trigger a state transition. Events may or not carry some data: for instance UserRequests event needs to contain the description of the product being priced. For those events requiring parameters, it is useful to define strongly typed events.

This is how we declare them with Stateless, for instance for the ServerSendsQuote event:

Now we can define transitions. For each state, we define which events are allowed and when they are triggered, which state we will transition.
This is very straight forward with stateless:

When the user performs an action or the server sends back a message we want to fire an event at the state machine.

This is straight forward with stateless

When we send an event to the state machine, two things can happen, the current state has a valid transition for this event or not.

If the current state can accept an event we generally want to execute our code at some point around the transition:

I tend to apply actions upon entry into a state and use the other variants only in specific scenarios.

Important: when implementing a statemachine, you want to put all your logic inside those actions (on state entry, on state exit, on transition) because the state machine has already checked that the incoming event was valid for the current state.

Here is an example with Stateless syntax. When the user requests a quote we want to log the transition and also to perform some logic on entry in the requesting state:

Tip: you can think of the OnExit action as a Dispose() method for the corresponding state. It is very useful if for instance you had a timer running during that state and you need to cancel it. This also works well with Rx and disposal of subscriptions.

By default, Stateless will raise an exception but you can handle yourself invalid transitions:

You can also ignore individual events on a state with the Stateless .Ignore() method.

We have now defined everything we need for the state machine:

The next step is to encapsulate everything in a single class so we don't leak the specifics of Stateless and the state machine to the rest of our code. For our example, I've created a class Rfq that you can find here.

This class implements the following interface:

This is very much CQRS style: a view model can call the RequestQuote, Cancel and Execute methods which act as commands and internally fire events. Don't get confused by 'Command' and 'Event', they are the same, it's just that in the context of CQRS we talk about commands and for state machine I've used the term event from the beginning (we could use 'message' as well if we want).

The view model also subscribes to the Updates stream which will notify when the state machine transitions and provide the relevant data (a quote, an execution report, etc).

You can find some sample usage of this API in the test project. 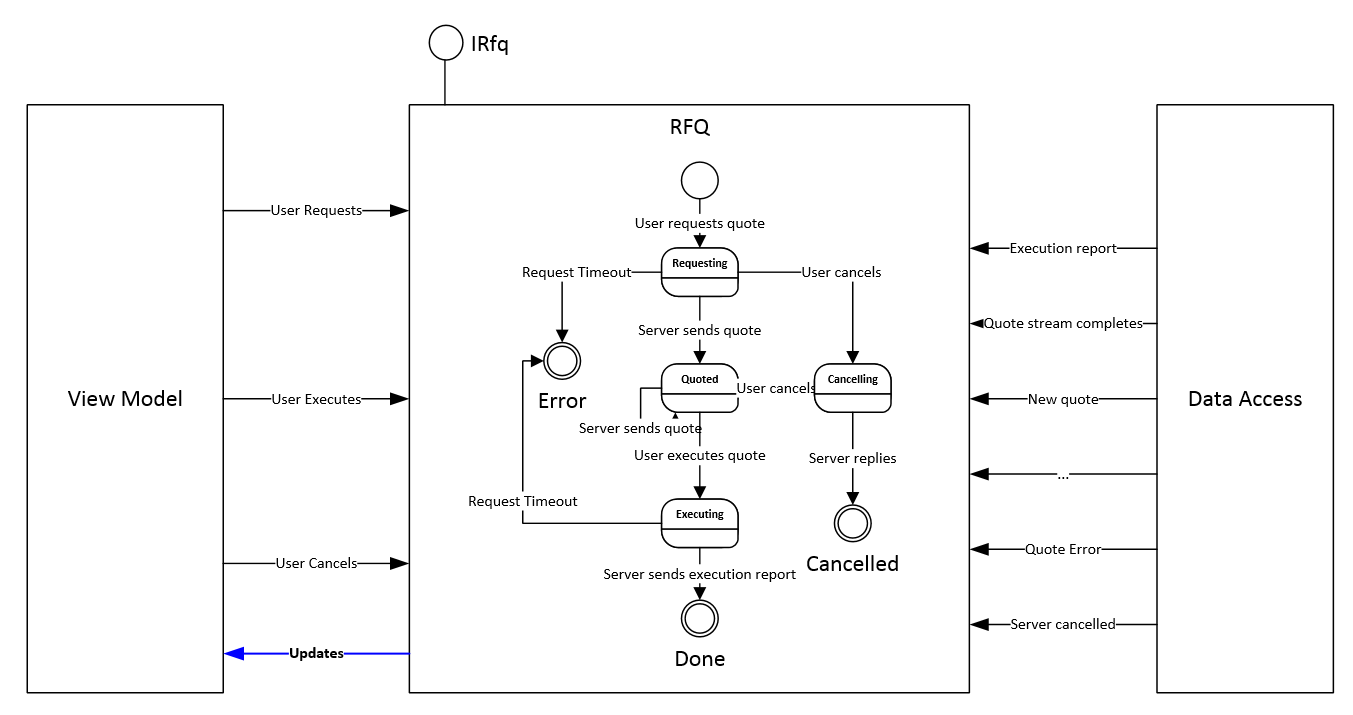 I would strongly suggest getting your state machine running on a single thread. In my example the view model OK call from the UI thread (Dispatcher) and I explicitly marshal server side initiated messages to the UI thread using ObserveOn in my Rx queries.

If you are not building a UI, you should consider running your state machine in an actor or an event loop: anything that will guarantee that calls made on the state machine are sequenced/serialized and do not have to be synchronized.

Why? Simply because otherwise you will have to synchronise all accesses to the state machine (and other states in your encapsulating class) with locks. If for instance you take a lock while firing an event, all the actions will run under that lock. Those actions will likely call on code external to this class and you now have risks of deadlock.

Never forget that in an event driven system things can happen in an order you do not expect, and your state machine should be ready for that.

Here is an example, which use a slightly different protocol for the RFQ:

Because there is a propagation delay between a client and a server, you will see behaviours in your systems that you did not consider initially and that you have probably not covered in your unit tests.

What to do about it?

Matt wrote some code which reflectively retrieves the definition of the state machine and is able to produce a graph definition in DOT code (a language to represent graphs).

To generate a diagram from the output of the graph generation code, you can either download Graphviz and run it locally or simply use an online GraphViz webapp.

This is the output I got using the webapp: 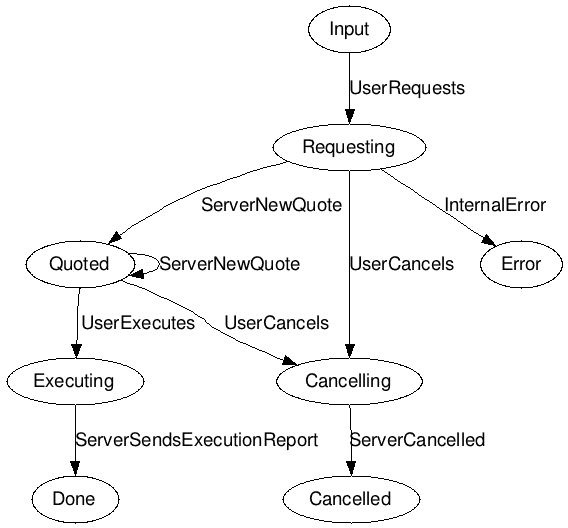 It takes a bit of time to get your head around state machines but once you get it, those little things yield very nice clean code and it's also very simple to introduce new state and transitions if you follow the few guidelines we discussed here.

There are a few other things I'd like to talk about with state machines (for instance visualising them while the system is running, code generation, etc) but we will cover that in a future blog post.

I would also like to suggest you have a look at the work of Pieter Hintjens (ZeroMQ) on state machines and code generation, he has done some very cool stuff in this area.

We use cookies to collect information about how you use Adaptive’s website. We use this information to make the website work as well as possible and improve our services.

These cookies do things like remember your preferences and the choices you make, for example, language, to personalise your experience of using the site.

These cookies are necessary for the website to function and cannot be disabled from our systems. You may disable these by changing your browser settings, but this may affect how the website functions. These cookies do not store any personal identifiable information.

We use Google Analytics to measure how you use the website so we can improve it based on user needs. We do not allow Google to use or share the data about how you use this site.